Concentrated Gorilla tourism was set up in Uganda at Bwindi Impenetrable National Park in 1993, Gorilla tracking was first established at Buhoma and later other trailheads were introduced namely Nkuringo, Ruhija and Rushaga. Since then the number of Gorillas has increased, more than 400 mountain Gorilla, 12 habituated groups can be tracked at Bwindi Impenetrable National Park.

Benefits of Gorilla Tourism to Uganda

The most important benefit of Gorilla tourism has helped on the protection of the endangered mountain Gorillas and hence increase revenue collected by the Uganda Wildlife Authority through selling of Gorilla permit to tourists. The revenue collected is used to pay park rangers and developing the park community welfare. Gorilla tourism has also helped in the provision of employment to tour guides, Safari trackers, Gorilla Lodges and Hotel attendants among others.

Gorilla tourism has helped Bwindi Impenetrable National Park to develop into a major centre for employment of the local community. The prospect of work enticed many people into the region and as a result the population in the vicinity of the park has increased dramatically.

Ecotourism is considered as the most appropriate form of tourism for the property since the park was gazette; Bwindi is the “cow-park” for Uganda Wildlife Authority generating almost 50% revenue. The considerable income generated from gorilla tourism safeguards the maintenance of the protected areas, the national park authorities benefit from this income, as does anybody who generates income from gorilla tourism. 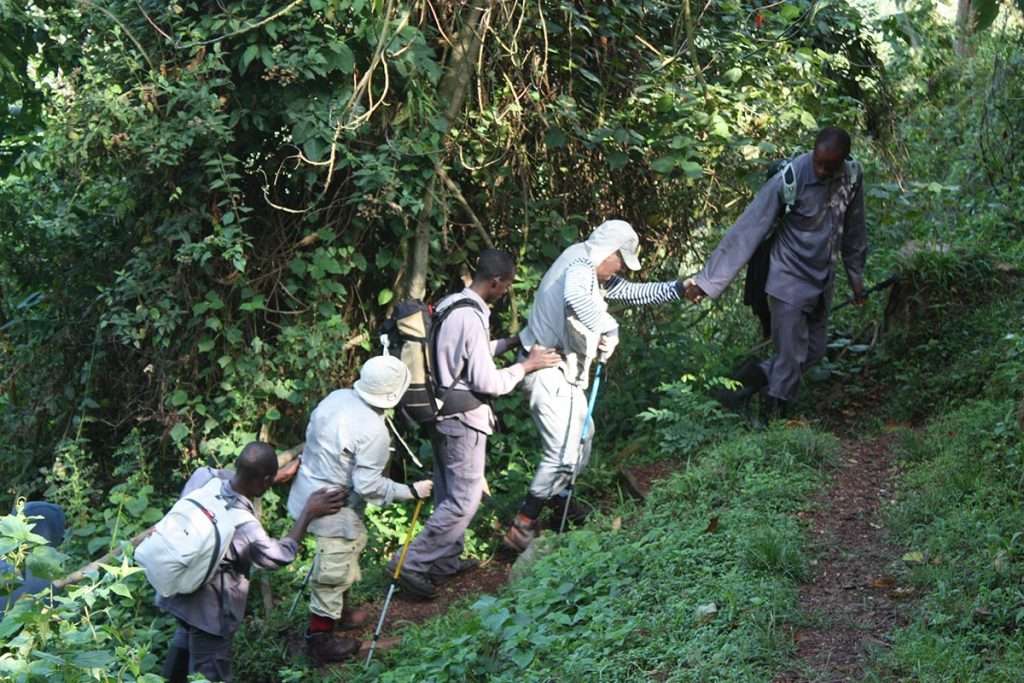 Guides and Porters Guiding a tourist in Bwindi

Gorilla tourism has been a significant tourist attraction for Uganda since 1993 and has the capacity to generate substantial income for the country. The frontline communities around Bwindi Impenetrable National Park have been employed at the park as porters and the sharing of revenue from gorilla tourism with the local communities around BINP requires the allocation to local communities of USD $ 10 on every permit sold. The Uganda wildlife Authority has built hospitals, schools and roads in and around the park.

Gorilla tourism generates local revenue and employment opportunities to local communities, lodging facilities have been built in Bwindi Impenetrable National Parks in Uganda in turn creating jobs to the local community through selling agricultural products and crafts to tourists on safari.

Gorilla tourism at Bwindi Impenetrable National Park has helped to eradicate poaching; poaching in Bwindi is mainly by snaring. Snares can accidentally trap an untargeted wildlife, poaching has led to the snaring of a number of gorillas which have been rescued by veterinary staff. It should be noted too that no Mountain Gorilla has ever died out of snaring as interventions have always been faster for those who are snared accidentally.

This site uses Akismet to reduce spam. Learn how your comment data is processed.