The Best Tanzania Safari Experience : Tanzania is a land of amazing wildlife and flora in the world, this incredible place is often considered as the heaven for both wildlife and the enthusiast. Let’s have a look at the greatest spots to visit in Tanzania:

The Serengeti National Park is a wide treeless endless savannah plain where 2 million animals live or pass through in quest of new grasses. It is best known for the yearly wildebeest migration, you’ll also view the Big Five animals like lions, elephants, leopards, black rhino, and buffalo, and nearly 500 bird species in the Serengeti.

Every year, tens of thousands of tourists visit the Serengeti. The months of December through June are ideal for animal watching in Serengeti National Park. The rainy season lasts from March to May, and the coldest months are from June to October.

Hiking up Kilimanjaro means going from the heat of the equator to the frigid cold of the arctic in just six to eight days. Kilimanjaro is a microcosm of many of the world’s habitats and climates. Trekkers climb through five climatic zones as they ascend 5895 meters. Climatic zones are defined as regions with generally consistent temperature and precipitation. The first 1800 meters of the mountain was once dense with forests but is now cultivated with plantations and pastures in this area of heavy rainfall and rich volcanic soils.

Mount Kilimanjaro can be climbed at any time of year; however, the peak season is from late June to October, when it is dry.

The landscape of Lake Manyara National Park includes forest, woodland, grasslands, and wetlands. Lake Manyara Park’s main attraction is its enormous population of elephants, tree-climbing lions, and hippos, which may be seen at a much closer range than in other parks.

Mafia Island Marine Park contains coral gardens, a diverse fish population, and a laid-back diving ambiance. There are several bird species and over 400 fish species can be found in the area. Mafia Island is also a traditional breeding place for critically endangered green turtles.

Mafia is also a popular destination for deep-sea fishing, particularly for tuna, marlin, sailfish, and other large game fish.

The Ngorongoro Conservation Area, located between the Serengeti and Lake Manyara, is home to the iconic volcanic Ngorongoro Crater and is one of Tanzania’s most popular wildlife viewing places. This massive volcanic crater offers a constant supply of water, attracting thousands of species that stay in the area instead of moving to search for water.

Visitors come here mostly to see huge animals and birds. Thousands of animals may be seen on the crater floor, including lions, elephants, rhinos, Thomson’s gazelles, and buffaloes, but wildebeests and zebras account for more than half of the animals that live in the Ngorongoro Crater.

Tarangire National Park is an excellent place to see animals. It is preferable to visit during the dry season, which lasts from July to September when the animals congregate along the river. 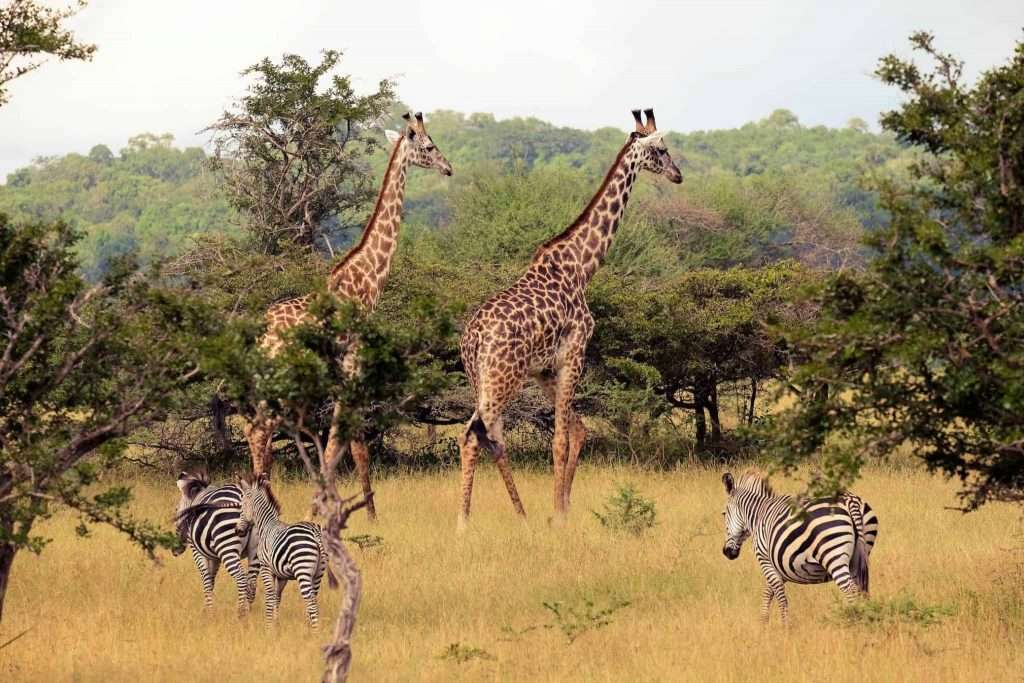 Selous is Africa’s largest game reserve about 54,600 km2. It was founded in 1922 and now accounts for 5% of Tanzania’s total land area. The southern section is a prohibited zone that is underdeveloped, highly forested, and has a series of high cliffs. Visitors are restricted to the area north of the Rufiji River. This section of the Selous Game Reserve contains a lot of open grasslands and woodlands, rivers, hills, and plains. The months of July through October are ideal for a visit.

The Rufiji River, which cuts through the Selous Game Reserve, has the biggest catchment area of any river in East Africa. The river is an essential component of the reserve since it allows visitors to observe the rich water-based fauna. Elephants, hippos, and rhinos can be seen here, and buffalo, antelope, giraffe, warthog, wildebeest, lion, leopard, and cheetah. Over 350 species of birds have been documented in the Selous Game Reserve. 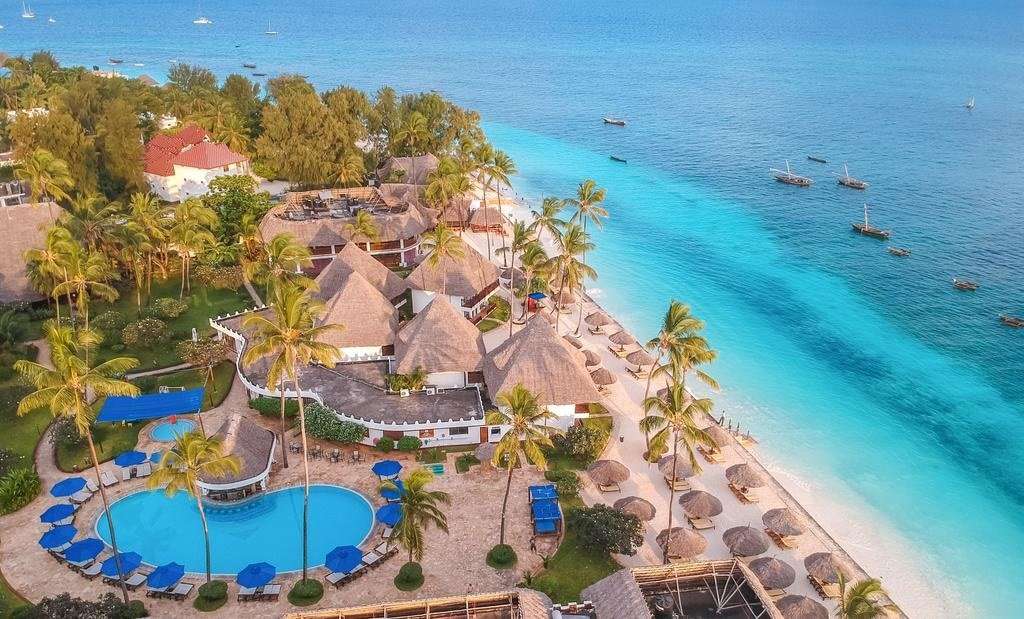 Zanzibar, commonly known as Unguja, is a popular tourist destination in Tanzania noted for its magnificent beaches. This island is part of the Zanzibar island chain, which includes the islands of Zanzibar and Pemba. It features some of the best beaches in the world.

The surf changes depending on which side of the island you’re on, but tourists can expect smooth white beach and crystal shallow water, as well as traditional boats lining the beachfront.

Ruaha National Park is the largest national park in Tanzania; the park has the highest concentration of wildlife in Tanzania, Ruaha National Park inhabits about 10% of the world’s lion population, the park has a concentration of elephants, herds of buffalo and gazelles, there are more than 574 bird species namely Crested Barbet, pale-billed hornbill, racket-tailed, Dickinson kestrel among others.

River Ruaha is the main source of water to wildlife in the Park. Other animals that inhabit the park include leopard, zebra, giraffe, lesser kudu, greater kudu, wild dogs, black-jackal, hyena, waterbuck, bushbuck, impala, and Hartebeest. The Park is one of the least busy places to visit in Tanzania. Kindly contact us for more info about Safaris in Tanzania.

This site uses Akismet to reduce spam. Learn how your comment data is processed.