Lowland Gorilla Trekking in Congo: Eastern lowland gorilla trekking is possible in the Democratic Republic of the Congo’s Kahuzi-Biega national park in Bukavu and Maiko national park. Eastern lowland gorillas are a subspecies of eastern gorillas that live in afro-montane forests in eastern Congo. Grauer’s gorilla is another name for this subspecies of eastern gorilla.

Eastern lowland gorillas may be found in forests around Kahuzi-Biega and Maiko National Parks, such as the Usala woodland, Tayna Gorilla Reserve, and the Itombwe Massif. The population of eastern lowland gorillas has fallen dramatically from an impressive 5,000 individuals in 2004 to 3,800 individuals in 2016. Their current number is unclear, although scholars assume it is less than 3,800 people. There are several reasons why their numbers continue to decline, the biggest one being that the species is continuously hunted down by poachers for bush meat.

Lowland gorillas live in the lowland and Albertine Rift montane forests of eastern Democratic Republic of the Congo. Recent scientific study, however, has revealed that eastern lowland gorillas now occupy just 13% of their original geographic range/habitant.

Lowland gorilla trekking in Congo is best done at Kahuzi-Biega national park. The national park is a protected area in Bukavu town in the DRC’s eastern region that has been designated as a UNESCO World Heritage Site. The park is located on Lake Kivu’s western shore, near the Rwandan border.

How different are Eastern Lowland Gorillas from Mountain Gorillas?

The biggest of the four gorilla subspecies is the eastern lowland gorilla. Mountain gorillas are defined by their huge body size, big hands, and short nose, hair, and teeth. When standing on two feet, Eastern Lowland gorillas may reach a height of 4 to 512 feet and weigh up to 440 pounds. Visitors monitoring the subspecies will have little trouble distinguishing between the two. 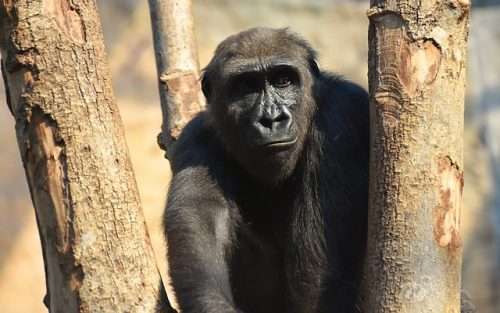 Eastern Lowland Gorilla trekkers in Congo have no need to be concerned about their safety. Trekking east lowland gorillas in Kahuzi-Biega or Maiko National Parks is completely safe for visitors. Visitors are constantly escorted by armed and knowledgeable park guards.

How much is Lowland Gorilla Trekking in Congo?

When is the best time to do Lowland Gorilla Trekking in Congo?

The Eastern Lowland Gorilla trekking is possible all year; however, it is best done during the dry seasons of May to August and November to January. Hiking routes going to the gorillas’ site are less slick and considerably simpler to maneuver.  However, because this subspecies is in a wooded area, rain is predicted at any moment; consequently, hikers should always have a raincoat and a decent pair of hiking boots.

Where to Stay in Kahuzi-Biega National Park for Gorilla Trekking.

When on a gorilla trekking safari in Kahuzi-Biega National Park, tourists can choose from a variety of lodging options. Mount Kahuzi Hotel, Lakeside Hotel Bukavu, Lodge Coco, Orchids Safari Club, Hotel Begonias, Exodus Bukavu, and others are among them.

What to Wear While Trekking

Before tourists set out to chase mountain gorillas in Kahuzi-Biega National Park, they are briefed by a head ranger and given a rundown of the park’s rules and regulations. The following are the laws and requirements for tracking gorillas in the park: