What is Chimpanzee Trekking?

Chimpanzee trekking is an exciting sport in which people travel into the forests in search of habituated chimp families and spend one hour with them in their natural habitat. After gorilla trekking in Bwindi Impenetrable National Park and Mgahinga Gorilla National Park, chimp trekking is Uganda’s second most popular safari activity.Uganda is home to approximately 5000 chimps, which are spread across several national parks and game reserves, including Kibale Forest National Park , Toro-Semuliki Game Reserve, Budongo Forest National Park in Murchison Falls National Park, Kyambura Gorge in Queen Elizabeth National Park, and Kalinzu Forest Reserve in Bushenyi District.

Where to go for Chimpanzee Trekking Safaris in Uganda

Kibale National Park is located in western Uganda and is one of the most popular chimp trekking sites in the country with roughly 1500 chimps.This park is famously named the “Primate Capital” since it is home to 13 primate species such as chimps, grey-cheeked Mangabeys, olive baboons, red-tailed monkeys, l’Hoest monkeys, black and white colobus monkeys, blue monkeys, bush infants, and pottos. Chimpanzee trekking in Kibale National Park has two sessions: one at 8:00 a.m. and one at 3:00 p.m.

Chimpanzee trekking in Uganda’s Kibale National Park begins with training at the Kanyachu Information Centre, following which tourists are divided into groups of six to hike each habituated chimp family. Following the briefing, you will begin hiking in the forest with a park guide who will show you the chimp routes to follow and share facts on the endangered chimps. Trekking in the forest takes around 2 to 3 hours, and after the chimps are located, you will be able to spend one hour with them in their natural environment shooting photographs, capturing the moments, and learning more about their lifestyle, customs, and mannerisms, among other things.

Visitors who wish to spend more time with the chimps can take advantage of Kibale National Park’s chimp habituation experience. Chimpanzee habituation is the process by which chimps are educated to get accustomed to human presence. The procedure is carried out by a team of researchers, guides, and trackers, among others. A full day chimpanzee experience permits four guests to spend four hours with the chimps under habituation, as opposed to the one hour provided while trekking.

The full-day Chimpanzee Habituation Experience (CHEX) works with a chimp community which is undergoing habituation. Early visitors can watch chimps leaving their overnight nests between 6:00 – 6:30am before feeding, copulating, hunting, breastfeeding, resting, patrolling and displaying until it is time to build new nests around 7pm.

The park’s population of elephants travel between the park and Queen Elizabeth National Park. Other terrestrial mammals that are found within Kibale National Park include red and blue duikers, bushbucks, sitatungas, bush pigs, giant forest hogs, common warthogs, and African buffalo. The carnivores that are present include African leopards, African golden cats, servals, different mongooses and two species of otter. In addition, lions visit the park on occasion.

The park boasts many species of birds, including the olive long-tailed cuckoo, western tinkerbird, two species of pittas (African and green-breasted) and the African grey parrot. 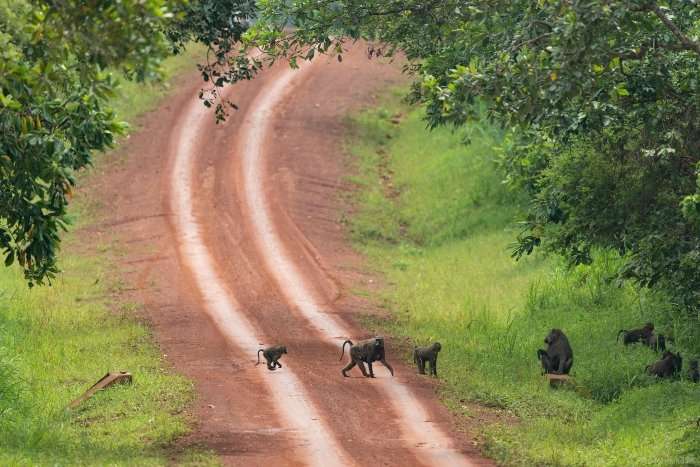 Budongo is a natural forest located in the southern sector of Murchison Falls National Park, Uganda’s largest and most visited national park. This jungle is Uganda’s second finest chimp trekking location after Kibale national park, and chimp trekking is done in two sessions, the morning session beginning at 8:00 am and the afternoon session beginning at 2:00 pm at the park headquarters. Trekking through the jungle takes around 2 to 3 hours or more depending on where the chimps are located because they tend to go deep into the forest in search of food, especially during the dry season.

Once the chimps have been located, you will spend one hour with them in their natural environment, photographing them with flashless cameras, preserving the moments, learning about their behaviors, and habits, and watching them play in the trees, among other things.

Kalinzu is a natural forest reserve in western Uganda’s Bushenyi district, between the Maramagambo forest and the Queen Elizabeth National Park. The forest reserve is also home to chimps, which may be observed in the morning or afternoon by following woodland paths. Chimpanzee trekking in Kalinzu woodland takes around 2 to 3 hours, and once you’ve spotted the chimps, you’ll spend an hour with them in their natural habitat.

Kyambura Gorge is located in Queen Elizabeth National Park, Uganda’s second biggest national park. This park is known as the “Valley of the Apes” due to its abundance of primate species such as chimps, olive baboons, and black and white colobus monkeys.

How much is a Chimpanzee Trekking Permit?

When is the best time to do chimpanzee trekking in Uganda?

Chimpanzee trekking in Uganda may be done at any time of year, but the optimum time is during the dry season, which lasts from June to September and December to February. The dry season is also known as the peak season, and visitors prefer it because there is less rainfall in the forests during this time, so access roads to the chimp trekking destinations are passable, shrubs in the forest are short, and trees in the forest have short leaves, allowing for clear viewing of the chimps, and the chimp trekking trails are dry and passable, as opposed to the rainy season when the trails are wet.

Though there is heavy rainfall during the rainy season, which makes chimp trekking difficult, visitors who visit will have the park to themselves due to fewer crowds, lodges will offer discounts to visitors as a way of attracting visitors to visit, and chimp trekking permits will be less competitive, which means that last-minute visitors can also trek the chimps, and there will be plenty of food for the chimps, so visitors will not trek them for long because the chimps can be viewed close to the park headquarters.

What to pack on your Safari

When packing for your chimp trekking safari in Uganda, you should include the following items: